What Happens to Debt When You Die?

What Happens to Debt When You Die?

You can’t take it with you, right? Debt just disappears when you die, and your family gets all your stuff, scott-free! Sadly, it doesn’t work like that.

Your debt still exists, and your estate’s assets can or will be used to pay them off. There are some immediate concessions for surviving spouses and family members before we get to the debts. Then there’s a set hierarchy of which creditors get paid first, under what conditions, and in what proportion. It’s a somewhat complicated set of rules, but John is here to make it simple and easy to understand.

You’re getting ready to pass. You’ve just loaded up with your American Express, Visa, Discover, and any other card you can think of with every bit of debt imaginable. What happens to those debts when you die?

Today we’ve got to figure out who has to pay the debts that are left when you pass on.

The answer is somebody is going to be paying for those debts. Now, first, we want to think about what type of debt it is, because that’s going to affect what happens to it. Then we’re going to think about who gets paid first, because we don’t want to just have a rush to the courthouse to try and get paid.

So, first things first, what type of debt are we talking about? For certain debts, it doesn’t matter that you’ve passed on — that debt remains intact. So, if we think about secured loans, these are debts where you took out money. You borrowed money to buy a thing, such as a mortgage on a house, a car note, or some piece of equipment that you bought. You borrowed money, and, in exchange, you signed a lot of paperwork telling the bank that if you forget to pay, they can come take that thing back. Those are debts where you’re going to have to end up paying for them one way or another. So, your beneficiaries, if they take the asset, will remain on the hope to pay the remainder of the tool.

Their options may then be to just sell the house. The same is true if you want to buy a car. So, even though you always wanted that Ferrari, you can’t just get a note on it, drive it for a few weeks before you pass, and then have your kids enjoy it without having to pay the bill. Somebody’s going to have to pay off the bank when it comes to paying off those notes.

Now, with other debts, it’s a little less clear what happens. So, unsecured debts, such as credit cards and loans to individuals, are not necessarily going to get paid, especially if there aren’t enough assets in the estate to pay them off. The problem is that they’re going to have to wait in line to get paid off.

Now, the beneficiaries of the estate take a back seat to the creditors, but it’s important for creditors to make sure that they protect their rights by properly claiming and presenting their claim to the executor of the estate.
So, secured notes are going to have to get paid back one way or another. Why? The bank loaned money to allow you to purchase a thing and we can point our finger at the thing that was helped to be purchased. When it comes to an unsecured note, like a credit card, it’s not as clear that they will get paid back, since just because you went to Taco Bell, it doesn’t mean there’s a way to repossess those tacos, so that’s another option.

The last thing is what if somebody else had co-signed on that loan? So, if you have a loan where two of you, say a husband and wife, both signed on the dotted line for that debt, the survivor is going to be on the hook for the full amount of the debt.

So, there are three options. If it’s secured, the bank’s going to get paid or they’re going to get their thing back. If it’s unsecured, good luck to the bank and trying to get money. If we’ve got a co-signer on, then the co-signer who’s still alive is probably still going to be on the hook for that debt.

Now, I mentioned earlier that there is a priority for claims that are going to get paid. Things we want to think about here are the policy implications of not wanting everybody get paid first. There are certain things we want to make sure get paid off. Here in Texas, the first things that get paid are a family allowance and a homestead exemption or exempt property that’s set aside for the survivors.

Exempt property includes things like the homestead and a certain amount of cash that we can take and pass on the spouse. This is off the top and it makes sure that the spouse gets protected. For public policy reasons, we just want to make sure that they are taken care of, even if it means the defeating the creditors.

The other option is a family allowance. So, this is an amount that’s set aside for the support of the decedent’s surviving spouse and possibly any minor children. It’s there for maintenance of the family for one year, starting after the date of death. This isn’t an amount that has to get paid out, rather just items that can be paid out.
Beyond that, we also want to think about certain debts where the debtor’s not going to go away. The IRS is one example where you’re going to be paying the IRS no matter what. What happens is, you’re going to have to file a final tax return, and you may even have to file an estate tax return because the IRS will expect that they get paid.
Beyond that, Texas law sets out a priority of claims that will get paid. There are eight classes of claims and these interact with the exempt of property, the family allowance, and the IRS is to provide a hierarchy of who gets paid first. So, if we start putting these in order, first things off the top, the exempt property homestead, and that exempt property is going to go to the surviving spouse.

These are both limited amounts. If you have expenses over $15,000, those get kicked down to class A claims, which we’ll get to in a bit. Next, the family allowance comes in. So, this is that one year of support for the surviving spouse. Then, we get into class two claims again. Class one and class two are separated by the family allowance and, above all of them, are the exempt property.

Then we’ve got the expenses of administration. So, these are things that are used to protect, defend, safe-keep, and preserve the assets of the estate. It also includes selfishly lawyer’s fees in assisting with the administration. So, we’re here pretty much at the top, trying to preserve and protect things for the family, as well as the surviving spouse.

After that, we skip into federal debt. So, this is where the IRS steps in. They’re going to allow the exempt property, the family allowance, the estate administration, the funeral finance, and the final medical expenses to get paid before they do. But, everybody else is going to come behind them.

After that comes class three claims under our Texas statutory scheme. Secured creditors get to step in here. So, if they have a claim, this is where they would get paid out. They would want to get paid off on what is going to be possibly sold from their asset.

We then get into class five claims. So, these are claims for taxes, penalties, and other interests due under the Texas tax code. These claims are making sure the state of Texas gets paid off for any taxes that may be due.

Class six claims are going to be at the cost of confinement. So, if you have been in jail and there are any costs to your confinement, this is where they get paid.

Class seven claims will be claims for repayment of medical assistance under chapter 32 of the human resources code on behalf of the decedent. These claims are basically repaying the state for medical care.

Finally, class eight claims include everything else. This is where your credit cards go. This takes off if you are owed money from a neighbor. Finally, if you have any claims left over from your funeral clients or cost of final illness, they get lumped in here.

So, we pay these in order. If you run out in a higher claim, then those lower claims are going to get defeated. This is why credit card companies are going to be making sure they let you know, “Hey, don’t forget to pay us”. They want to make sure that you pay them off and they’re going to try and get paid before everybody else, but they come at the end. So, it’s important to remember. They are there at the end. They get paid in that class eight after everybody else has been paid.

What happens if we don’t have enough money to pay off a particular class? So, let’s say we get all the way down to class eight claims. Everybody in class one through seven has been paid off, and we’re down to class eight claims. We have $100,000 of claims and only $10,000. Who gets paid? Everybody’s going to get paid, but they’re only going to get paid in proportion to their claim.

So, there’s $100,000 of claims. If one of those claims is for $50,000, that claim is going to get paid $5,000. They’re not going to get paid $10,000 because they have the biggest claim and they take all of it. Nope. Everybody gets paid proportionately. If we run out of assets, we run out of assets. There’s nothing left for the beneficiaries. We’re very sorry. What didn’t we say? When we look at this, beneficiaries of the estate aren’t personally on the hook for any of these claims. The assets of the estate must pay off the claims. 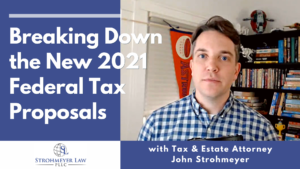 John breaks down the proposed new federal tax measures being put forth in the House in September 2021. He walks through the main points and helps you understand what provisions might affect you, your business, and your family. 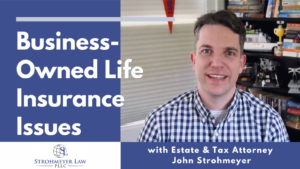 Business owners! Make sure you're staying in compliance and tax-advantageous with regards to your company-owned life insurance policies on employees (aka Keyman or Keyperson Insurance). 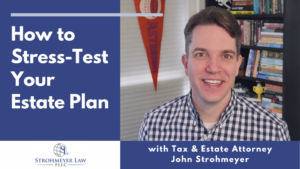 You've got an estate plan, and you don't plan on dying soon. That's great! But if something did happen unexpectedly, does that plan still fit your needs and goals? Is your situation the same as it was when you drafted those documents? 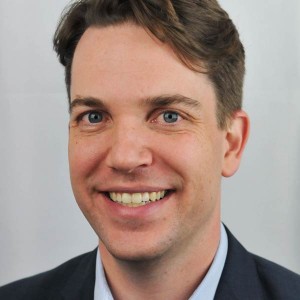